A question and a suggestion. Forgive me if this has been asked already. Have you considered creating an API to your source code editor to allow 3rd parties to create graphical IDEs to compose graphical interfaces, components in a typical drop in component fashion, so that the resulting objects can create code directly in RJTextEd? Your source editor is SO good that I can imagine other developers wanting to use it as the target for any graphical user interface builder. From their point of view, what is the point in developing their own editor when such a good one already exists?

If RJTextEd had a series of defined APIs that allowed another program to interface directly with it then as long as the 3rd party program generated real and useful code then it could become an integrated development environment. So many of these GUIs already exist but so very few have a good code editing environment as yours beneath them. I haven't come across an editor that provides this level of integration ( I assume they exist though )

It might encourage commercial usage and all you would have to do is to maintain/develop the APIs. Commercial usage could be key-controlled, allowing usage of both products individually but not together without a key. Just an idea...
"Noli pati a scelestis opprimi"... or is it "non lacessit illegitimae te carborundum"?

Not sure how to implement such a thing and make it work. Besides, I've never had any request for something like that. To me, it just sounds like a lot of work for something that no one may ever use.

And I wont release the source code for the editor component. It contain some code I'm not allowed to publish and I don't have time to create any help or support for the component anyway...

That's fine RJ - understood. Thankyou for the feedback. You don't need to be sorry at all. You have only a certain amount of time and some suggestions just aren't applicable.

My initial idea was to build upon the kludget widget engine (open source) and develop a graphical IDE similar to the xwidget IDE but with a decent code editor attached.

It was just an idea and I have abandoned my part of it it as being impractical only this very day, so your feedback was very timely. Thanks again.
"Noli pati a scelestis opprimi"... or is it "non lacessit illegitimae te carborundum"?

The idea was rejected and that's fine. I am NOT trying to re-open it.

Just explaining a little further what I was looking for and why.

The Xwidget engine provides a lovely IDE for graphical placement of PNGs to allow composition of a program interface using a typical graphical composer. It is really quite nice and friendly once you know your way around it. It works in the same fashion as the forms designer for VB6 or any other modern IDE. The difference is that it works by default with images instead of predefined controls. There are no square windows, title bars nor scrollbars and instead your PNGs exist on a transparent mask that provides you with the capability to create non-square see-through apps of unconventional shapes and layouts.

Why is this so good? - Well, basically, what it provides is a method of putting industry-standard javascript (MS jscript) code directly on the windows desktop without the need for a browser. 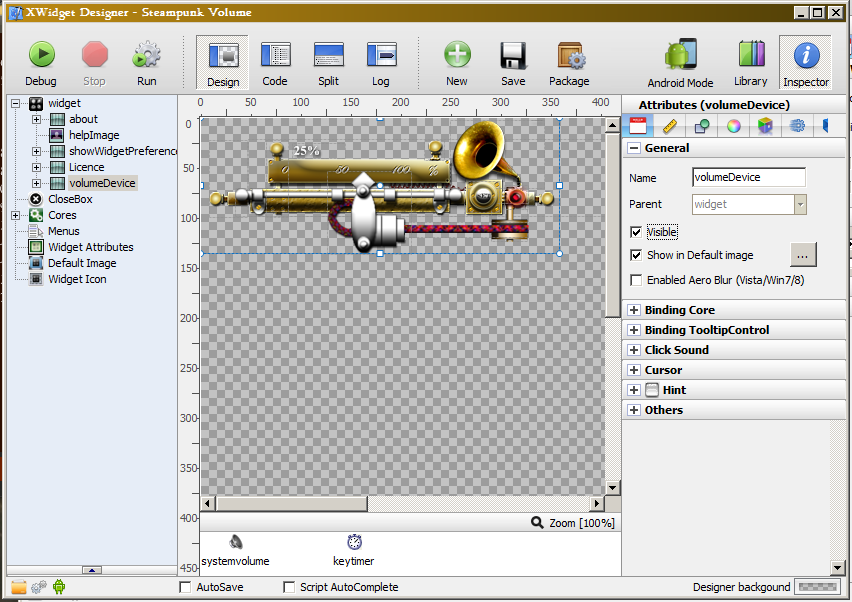 It allows you to assign events to each image and then attach javascript code to each event. This part of Xwidget is VERY good.

However, the code editor is APPALLING - that has to be in upper case to emphasise how bad it is. It is so bad as to be genuinely unusable (fixed size large text, search and replace non-functional, ghosting text during copy/paste, intellisense nope, intellibollocks), all the features of a half-decent code editor are completely missing.

Instead, to make development bearable I had to use an alternative external code editor in this case my old editor 'Context'. All javascript coding was carried out in context but to debug the program the widget would have to be restarted - but without ever saving through the Xwidget IDE. If that was done by mistake, you'd lose all your changes as the Xwidget IDE was completely unaware of any external changes. Once you'd got used to a method of working, it was do-able. However, it always frustrated me that such a fine graphical IDE was crippled by such a poor editor. It was impossible to get the Xwidget developer to do anything about the situation (no communication, no code, no roadmap, no nothing) so we were stuck with a reasonably good javascript engine, a decent GUI designer but an appalling environment to do real coding work. Using context was a mere workaround until I found a solution. 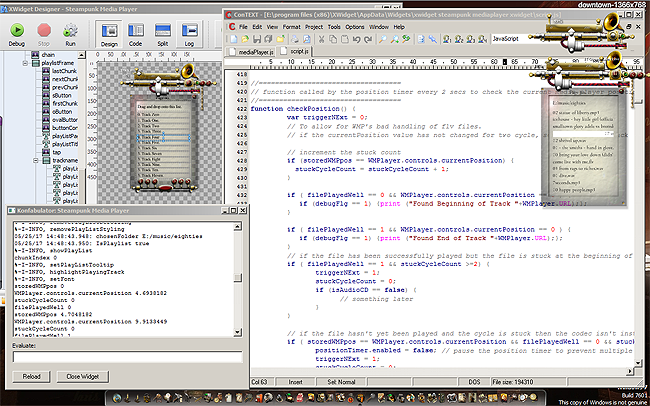 Fig 02. Showing the GUI editor, the Context external editor a debug window and a couple of running widgets.

My initial thought was to pick up a similar open source widget engine such as Kludgets and add a similar graphical designer and then attach/embed a 3rd party editor such as RJTe, combining off-the-shelf components to create a decent IDE.

Not wanting to start from scratch on three such complex components I was hoping I could utilise the work of other developers and connect three existing works together, a good desktop widget engine already exists in the form of kludgets, all I would need to do is to adapt an XML-generating GUI designer to create the designs and use an editor such as Context/RJTextEd for the default editor. Even this is a lot of work as it requires three different build environments, potentially three different language variants and three distinct methods of coding from separate groups of coders. Not easy.

Now that the idea has been abandoned (not entirely...) what am I doing instead? Well, I have knocked up some javascript that works with the Xwidget engine to take one of my Photoshop designs and creates the XML required for the Xwidget engine to interpret. That creates a design quickly. The Xwidget IDE is then used to add events. RJTextEd can edit the javascript code and the debugging is performed with Xwidget's awful editor.

The main thing I have done to solve the situation is to stop coding for Xwidgets altogether. It is a bloody pain and I just won't do it any more...

Having rejected my own reason for wanting this feature in the first place, the need for it returns again. The designer of Xwidgets has come up with a new tool, RainWidgets that allows you to compose HTML/CSS widgets and place them on the desktop. Each widget can be as complex as you require and so the term 'widgets' is a little misplaced. Potentially any web app could be placed on the desktop (eventually).

The current engine comes 'as-is', ie. it is just an engine and unlike its predecessor it currently has no IDE and no coding environment. It will require a GUI builder and a coding editor. Neither have been completed though I do know that the developer has built a prototype graphic designer that will ultimately require a decent editor...

Instead of building these himself, the developer has quite correctly focussed his energies on building the engine and the o/s APIs. My suggestion to him will be to embed a decent editor into his designer and therefore returns the requirement.
"Noli pati a scelestis opprimi"... or is it "non lacessit illegitimae te carborundum"?

Sorry to bump this one again.

The QB64 developers are looking for a modern graphical IDE for their compiler. They have a text based user interface (TUI) which is closely modelled on the QB4.5 IDE from the '90s. The language, MS BASIC is growing and improving. The compiler is a separate component and can be called discretely. One of their main developers has created a graphical forms designer for the desktop, they are now thinking of creating a graphical windows-based IDE that will supplant the TUI version and provide the whole IDE package in component form.

One developer named Dave has a working IDE called (unoriginally) Dave's IDE that strives to replace the original IDE in its integrated QB-like functions and aims to be a capable text editor like RJtextEd.

I suggested that they look at RJte for what an advanced editor should be.

Just raising this as just another example as to where RJTe could become the text editor of choice for those currently building IDEs for their chosen language if there was an API that allowed something like a graphical forms designer to interface with RJTe.

Just another thought.
"Noli pati a scelestis opprimi"... or is it "non lacessit illegitimae te carborundum"?

There are a number of Visual Basic Replacements coming out, one is TwinBasic and the other is RADBasic. There are others working on their own home-grown IDEs for VB6. One is using Visual Studio as the default editor and the other is building his from scratch. Another is looking at incorporating the Scintilla Editor.

If RJTextEd was pluggable into other projects as Scintilla is, it would be a benefit to those projects and to the acceptance of RJTextEd. I know Scintilla is FOSS and as such it makes it easier to incorporate Scintilla into other projects. I just thought I'd throw in my penn'orth again as I believe the combination of RJtextEd and a decent Graphic designer API could make a useful combo.
"Noli pati a scelestis opprimi"... or is it "non lacessit illegitimae te carborundum"?

You can find me on Deviantart https://www.deviantart.com/yereverluvinuncleber/gallery/
Top
Post Reply
7 posts • Page 1 of 1